Our church porch gathers together most of the memorials placed in St Mary’s over the centuries: they tell dramatic and sometimes tragic stories about the human lives of those they commemorate. Here are just five of the individuals commemorated at St Mary’s by those who loved them:

The Tower Porch memorial to Capt. Augustus Frederick Cavendish Webb (and its duplicate in Salisbury Cathedral) commemorates a young man from the nearby hamlet of Westwick, who fought with “brilliant” strategy at the Charge of the Light Brigade at Balaclava in 1854 but who suffered injury in the action. The three men who brought him off the battlefield were awarded the Victoria Cross and he was taken to the British hospital at Scutari, where Florence Nightingale had just arrived six days before. He died two weeks later in November 1854, aged only 22. 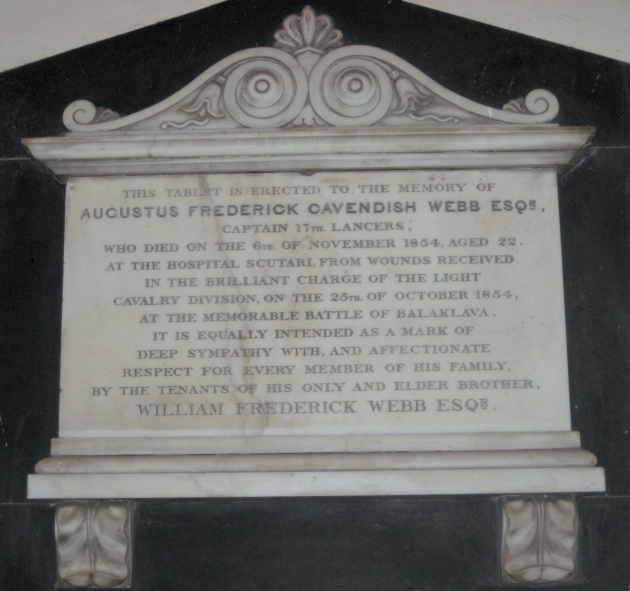 Baron Hullock and the Statue of ‘Justice’

By the porch doors is a statue of ‘Justice’ in Malta stone, by Sir Richard Westmacott R.A., commemorating Sir John Hullock (1767-1829). An eminent lawyer and Baron of the Exchequer who lived in Thorngate House at the bottom of The Bank, Sir John died of cholera whilst touring Oxfordshire as an Assize Judge. His body was brought home to St Mary’s where amidst great public grief, he was buried in the family vault in the south aisle of the church. ‘Justice’ originally stood above the vestry door in the chancel.

Son of John and Elizabeth Watson of Spring Lodge, George Watson was chaplain in the Duke of Wellington’s Army in France 1814, and served under General Robert Ross in the American War of 1812 (-1815), including the burning of the White House and Capitol buildings in Washington DC. Watson died, aged just 27, in the Gulf of Mexico on his homeward journey in 1815: some accounts suggest he was brought home for burial and interred in the nave of St Mary’s. 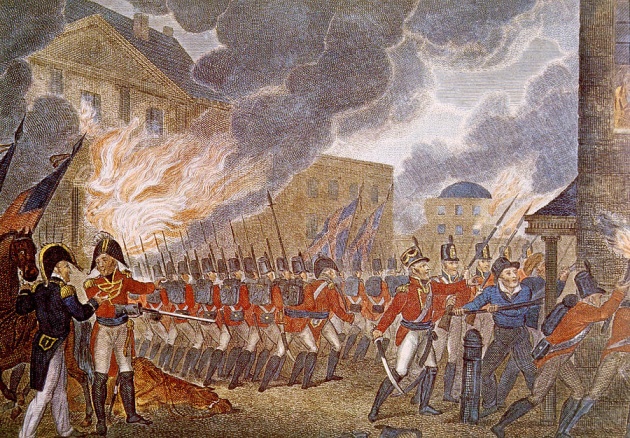 To one side of the main doors in the tower porch is a dull framed brass, originally on the south chancel wall: it commemorates Jonathan, first-born son (d. 1650), and John, second son (d.1652) of the priest assigned to St Mary’s during the Commonwealth – Rev John Rogers – and his wife Grace. After the restoration of Charles II, Rogers was ejected as an “intruder”. He ended his days across the river from Barnard Castle, preaching to a congregation that gathered in Startforth Manor House. Two short sorrowful verses commemorate first Jonathan, who lived just two weeks, and then John, who died aged 7 months.

“Hee peep’d into the world, where hee could see, /Nought but confusion, Sinne and misery

“Bles’d Soule, Thy name did mind of God’s grace /Thou wast his gift, whose love shew’d us thy face

But hee that gave, did take in seven moneths space /Thou found’st in Fathers armes a resting place.” 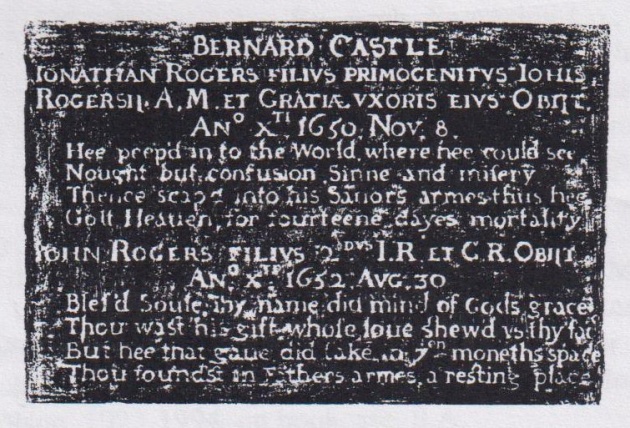